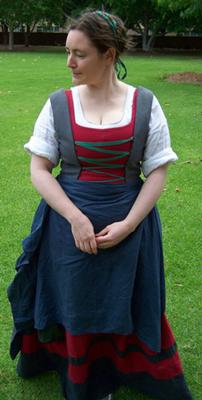 This is my Hollandish outfit. It consists of:
1) a linen chemise with blackwork edge (worked in silk) to strengthen the neckline
2) a red linen underdress (self-supporting) with black skirt-guards. It's a little long, but it covers my sneakers. It also has a straight skirt (rather than a circular-cut) which means it's not as swishy as it could be...
3) a wool overdress lined with linen - this used far too little wool - but I found a beautiful-feeling offcut I wanted to use.
4) a linen apron

The hairstyle is pretty common in the hollandish paintings (Beuckelaer/Aertsen et al). I do it by plaiting my hair then winding a ribbon around it, then looping them around my head and tying the ribbon in a bow. In the Hollandish pics they didn't seem to have plaited hair, just rolled - but that's far too fiddly for me.